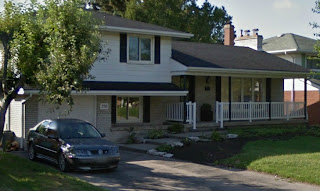 I drove by my old house in Mississauga recently. And my old grade and middle schools in the same trip. It got me reminiscing about people and events and brought all kinds of emotions and memories to my mind. The house is similar, but with new paint and different trees. The old apple trees are gone and so was the TV antenna. My first thought was don’t they know that the kids will need it to climb down off the roof when they sneak out a window after bedtime and over the roof? It worked on several occasions and was always Tom’s idea.

I pictured each house around our old one and who lived there in my memory. There was even an older man working the in garage where I remember Mr. Sevren working. Across the road was where Max and Susie lived. Down the road was Christies where my younger brother was dared into eating dog food. Greg and I were born on the same day, same year and used to have birthday parties together. Around the corner was where Bobby Maxwell and I smoked a pack of his dad’s Colt cigars in his tree house and made ourselves sick. Begg’s lived on the other side of us from Sevren’s and she did a lot of knitting if my memory serves me well.
Molters were between Lakes and Christies and I remember spending hours listening to music in the basement. Todd was a year older and we played a lot of baseball in the school field behind our houses. The older boys taught me to catch a baseball by throwing the ball at my head. The Nicholls were on the corner and on the way to Bobby’s house. They recently moved in to the senior’s complex where Elaine runs the salon. Fortunately for me she recalls that I was pretty much an angel. Guess she didn’t know about the cigars.
I sat in the truck in front of the old house so long that I expected Mrs. Lake to come out and run me off. Mrs. Lake was that lady in the neighbourhood who scared all the kids, and maybe a few of the adults. Eventually it was time to head for my next meeting. There were so many more memories that came to me then and as I finished my drive to Hamilton. Until the next visit…