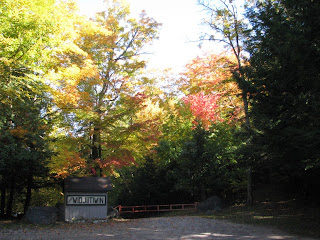 Camp is very quiet this week as we head into the fall season. The campers and staff all left on the Labour Day weekend, a small group helped clean camp, prepare for and run a youth retreat for 77 youth we hosted and now it’s just me on property closing up after a great season of ministry and God’s faithfulness. We had a GREAT summer of ministry including seeing 33 campers who became new Christians. We had the best staff this summer and all were dedicated to being ambassadors for Christ to the campers and each other. It was certainly a summer of personal and spiritual growth. My health made the long days difficult, but I knew I had a leadership team who were capable, dependable and reliable. There was a great spirit amongst the staff this year.

We finished the waterslide and it was a big hit with campers and staff alike. We build a large 20’ by 24’ gate and painted it to be part of the various theme weeks. Other big props included a 10.5’ Widjisaurus, turning the tower into the eye of Sauron and the Longhouse castle.
Our four year partnership with Toronto Police to bring at-risk-youth to Camp Widjiitiwin from Malvern and other communities within 42 Division in Toronto was a great success. In 2011 we had 67 campers in this program and this year we had 85. On the Monday prior to the group arriving on property we had raised just 25% of the funds needed for the week and no money in sight from our major funding partner. The officer called me and was considering cancelling the week. After careful consideration we decided to go ahead with our mandate to reach kids for Christ and trust God to deliver the much needed funding. Within the week we went up by $22,000 and completed our total funding goals two weeks before the end of the summer. Nine campers gave their lives to Christ that week. Two of the previous campers from this program were on summer staff this summer, one as a cabin leader. Next summer the target is 100 campers, making it our largest week of the summer. We are hearing about change happening back in the community from the kids experiences at camp. Very exciting!
Escape, our new partnership week with Hughson Street Church in Hamilton, also went very well. We had 33 campers with us for the first week. So many of them had never been out of Hamilton before. They had so many firsts, like swimming, archery, seeing stars, and hearing God’s Word. These campers came from families that are in the working poor category who just could never think about sending their kids to camp. We had three campers give their lives to Christ this week. Next year we’re planning for 60 campers to Escape to Camp Widjiitiwin.
From just 35 sponsored campers in 2009 we’re targeting 200 sponsored campers in 2013. More details to come in the new year, BIG things are coming.