Fruit Social – Each week we have Blast or Sizzle camps we have a Fruit Social. After chapel the kitchen staff lays out large trays of fruit for Sunday night snack. While that happens the campers and staff go down to their cabins to get “ready”. The sound guys and program staff set up the lights and get the speakers humming because pretty soon there will be lots of loud music and planet of dancing campers and staff. It’s a little like grade eight dances, at least when I was younger. You know when almost no one is out at the beginning and then they all dance. Usually there is a group of energetic staff that get it all going. 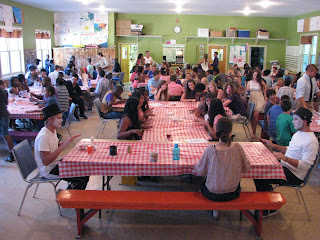 NOPA– each Friday night at dinner for Blast and Sizzle we dress up and have a nice dinner together. Almost everyone dresses up in something nice. We’ve even had a few tuxes. I store a suit jacket behind my office door just so I’m ready, although it doesn’t always go well with the shorts and t-shirt I have on hand. This event used to be called Copa when it was important for campers and staff to have a date. Nopa is a “No Date” version of the old Copa. Campers can sit anywhere for this meal and enjoy the company of people they don’t usually get to sit with. We recently added to it that the cabin leaders serve the campers at their table.

Cabin Clean-up – Every morning after breakfast the campers and cabin leaders go from breakfast to clean up their cabins. The goal is to score as high as possible for the ultimate goal of winning the end of the week ice cream sundae party. They can get up to 10 points each day for the regular cleaning like beds made, lights off, windows open, floor swept, etc. There are also bonus points available if you can figure out what the camp medic likes as a treat. Some options for the bonus points are letters and poetry, pictures, videos, music playing, candy, chocolate or other Tuck items. Some cabins and leaders are very good at it, others not so much. New this year – any score under a “4” means the cabin loses dessert that night. 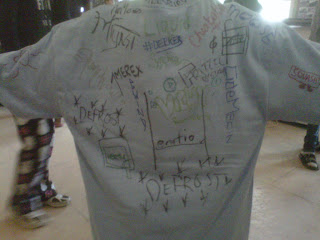 Signing Cabins & T-shirts – Widji has a tradition of allowing our campers and staff to sign their bunk and even leave a word of encouragement for others. There are signatures going back many years and generations. We have had parents bring their children to camp who were able to show the kids where they signed their name at camp when they were campers. We have a great tradition of multi-generational family camping. We also sign the camper t-shirts they receive as part of being at Camp Widjiitiwin. Saturday mornings after we watch the weekly camp video, all the staff use sharpies to sign their camp names on the camper’s shirts. Parents tell me these become prized possessions once they get home. Campers wear them coming back the next summer as a badge of honour.

Mortal Combat – This event is for Sizzle only. It’s a rite of passage like the wake-boarding/water-skiing we also do just for Sizzle. Mortal Combat is a massive pillow fight competition that comes down to the last person to triumph over all comers. It happens late at night and is a long standing tradition at camp. Men have been made by their standing or achievements in Mortal Combat. Everyone starts out at the beginning and are eliminated round by round until one champion emerges and is crowned the winner.
Cabin Clean-upfruit socialmortal combatNOPAsigning t-shirtstraditions