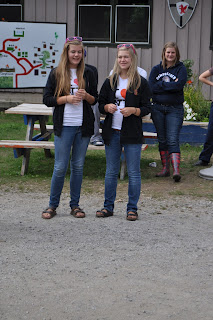 Named Meals – Sub Sunday, Taco Tuesday, Waffle Wednesday and French Toast Fridays, I tried to change some of these my first summer to great resistance. I did manage to add diced chicken to the Taco Tuesday meal, but the rest are well intact.

Meal time freeze game – to determine who in the cabin has to wipe the table and clear the dishes, cabins play the freeze game. This usually happens after they have gotten into some difficult to hold pose and the cabin leaders yell “freeze”. Campers can then be maneuvered into even more uncomfortable positions by their cabin leaders, other staff and sometimes other campers. The object is to stay as still as possible and hope that someone else moves first. The first person to move cleans up. I’ve seen a group of campers go most of a meal time in the frozen position and keep going even when their food is getting cold. On Saturday morning, The last day of camp, the campers get to call freeze on their cabin leaders and turn the tables on them.