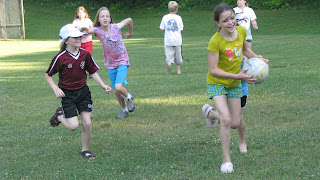 Widjiitiwin Basketball is the signature game of Camp Widjiitiwin in Muskoka, Ontario, Canada. Widji Ball is a combination of basketball, rugby, soccer and football.
The camp is divided into teams made up of staff and campers. The goal is to carry the ball down the field and score in the opposing basket (a person on a chair with their arms in a circle) to get as many points as possible.

There are five balls in play, so it’s like there are five games going on at the same time. There are balls for each of guy campers, girl campers, guy staff, girl staff and an all ball. Each group concentrates on their ball and not running into people smaller than they are. SALTers (our leadership campers) join in with staff or can have their own ball. Widji ball is played as two hand touch or with flags. It gets quite competitive as you can imagine.

We have an FB page for Widjiitiwin Basketball at www.facebook.com/WidjiitiwinBasketball.